Skip to content
Use of Environmental DNA to investigate biodiversity

Environmental DNA, or eDNA, is genetic material that is left behind in the environment as organisms pass through it. The material can originate from skin cells, scales, mucus, faeces or wounds, and because organisms have unique genetic sequences, it can be used to provide us with information on the presence of target species.

Sampling for eDNA in the field is a relatively straightforward process and begins with the collection of water samples. During an expedition to Diego Garcia in British Indian Ocean Territory in September 2019, Nick Dunn (PhD student at ZSL and Imperial College London) took eDNA samples from different locations around the atoll. At each of the 18 locations, he sampled water from two depths using a five litre Niskin bottle, which is essentially a chamber with two spring-loaded stoppers at each end. Attached to a rope, the bottle was sent down to a depth of 40m and a messenger weight sent down to trigger the spring to close the chamber and allow the team to bring the water sample back up to the boat. The 40m water was decanted into a storage container and a surface water sample was then collected. The water samples were stored on ice in a cool box and taken back to land for processing. 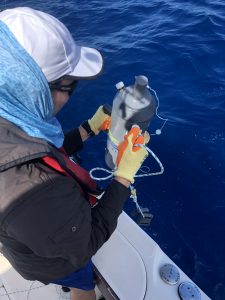 A Niskin bottle containing a sample of water from a depth of 40m.

Processing eDNA involves passing the water through an extremely fine filter to separate all the cells and DNA in the sample. As DNA can degrade quickly in water, Nick ensured that this was done as soon as the team returned to land each morning and evening. Three 1-litre subsamples from each container were passed through separate filters, a process which took between ten and 20 minutes because the filters were so fine. The filters were then placed in a preservation solution so they could be transported back to the UK for analysis without the DNA degrading. 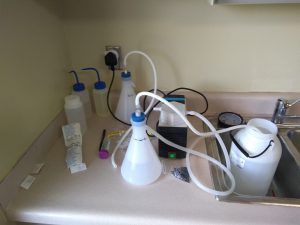 Working on eDNA is beneficial because you do not need to rely on chance encounters with animals to collect data and investigate the biodiversity of an area. The next steps, which are currently underway, involve finding out what species’ DNA has been collected in each sample using genetic sequencing methods. This will give us a clearer picture of what species are present around the island of Diego Garcia and if different areas are home to diverse sets of species.