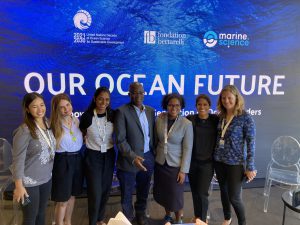 At the 2022 UN Ocean Conference held in Lisbon, the Bertarelli Foundation co-hosted with IOC UNESCO and ZSL an official side event on the morning of Tuesday 28th, June titled ‘Our Ocean Future – Empowering the Next Generation of Ocean Leaders’.

Marine scientists are at the heart of science innovation, translating scientific conclusions into management practises, and increasingly the move towards sustainable development. The technical capacity of ocean science remains unequally distributed among countries and regions, particularly in infrastructure, deep sea exploration and data management. While the number of scientific publications continues to increase, they are heavily skewed in origin and focus to the Global North. Networks of early career marine scientists are central to the innovation of transformative solutions. These networks can be further improved by encompassing diversity of disciplines, racial diversity, and gender. However, the contribution young marine scientists and conservationists can make is often overlooked and the level of support offered to them differs widely among countries. This event took the form of a conversation between three ocean leaders and three ocean youth from the Global South, with the goal of identifying clear actions to overcome barriers and accelerate opportunities for next generation ocean leaders.

​​​​​The recording of the live-event is available to watch below: